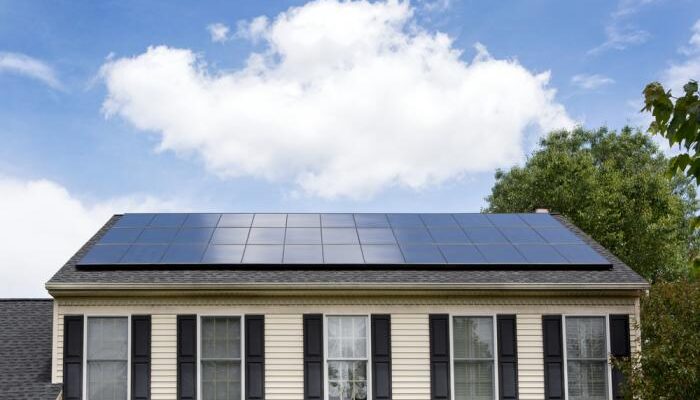 How much solar energy does a solar panel produce per square foot? This is not just a trivia question. It goes to the heart of figuring out what size solar panel system a homeowner needs. And it influences cost because the price of a solar photovoltaic (PV) system is determined in part by the kilowatt hours (kWh) of the system – how much power the solar panels can produce.

How solar panels are made to work in the real world

To understand how much solar energy is produced per square foot, it helps to know what solar panels are made of. A quality panel’s solar cell technology combines a strong copper backing with ultrapure silicon and a light-trapping glass surface that ultimately makes the panels 30 percent more efficient at generating power than conventional panels.

You might think this is a simple math question: If a solar panel is rated to produce, say, 360 watts, and is about 3 1/4 feet wide by 5 1/2 feet long, then each square foot should produce about 20 watts, TRUE?

Not quite. The real test of a solar photovoltaic (PV) system is how well it performs under real-world conditions. To produce the maximum amount of energy per square foot, a solar panel must be well designed to handle the temperature, spectrum, angle, and amount of light.

Spectrum: Cloudy days are a reality, but contrary to what some think, solar panels work on cloudy days. That’s because there is a broad spectrum of light. Some of it is visible to the human eye, and some of it, like infrared and ultraviolet light, is invisible. Clouds can block much of the visible light, but they don’t block the entire spectrum (which, by the way, is why you still get sunburned on a cloudy day). Name-brand panels collect more infrared and ultraviolet light than conventional solar panels. So as a homeowner, you’ll need fewer panels on your roof to produce the energy you need.

Angle: Each solar installation is unique because your home faces a specific orientation to the sun. Solar installers typically install solar panels facing south to capture the most direct sunlight. But even the sun’s rays will always hit at different angles sometimes. Most solar panels are built with “anti-reflective glass,” which means that once light enters the panel, it will bounce off the solar cell to harness as much energy as possible. The anti-reflective glass in some panels can degrade after prolonged exposure to the elements, but name-brand panels are known for their slow rate of degradation.2 Well-tested, high-quality components such as anti-reflective glass are one of the Reasons name-brand panels carry the most comprehensive full-system warranty in the solar industry.

Amount of Light: Solar panel output peaks around noon, but this can vary depending on your location. Shade from trees, dust, leaves, and other obstacles can obscure the light, affecting the solar panel’s power output..Shading can not only harm power production, it can also damage a solar panel over time. Most solar installers, especially major brand name dealers, will find a way to avoid shading for efficient energy production. And having solar panels that are 30 percent more efficient than the competition means you can use less space on your roof, so the panels won’t have to be installed in shady spots.
Equinox of well-known brands solar system panels also they come equipped with micro-inverters in each panel, so if one panel is shaded, the others can compensate for that slowdown in power production.

So how many square feet of your roof will your solar PV system cover? Due to the variables, it is difficult to pin down exact numbers. But at 20 watts per square foot, a system rated to produce 2 kilowatts would cover about 150 square feet, while a 3kW system would take up about 225 square feet. Every solar installer has sophisticated software that can detail your home’s exact power needs while looking at historical weather patterns, roof angles and other factors to tell you how many panels you’ll need and how much power they’ll be able to generate per square foot.

Do you have limited roof space? Our recently launched A-series panels incorporate the best of our reliable, high-performance technology into the world’s first 400-watt and 415-watt commercial residential solar panel. A-series panels are a great option if you want to get the most power from your roof in a limited space, maximizing your savings on your electricity bill.

When installing solar panels, keep in mind that you’ll want a system that generates the most power you can afford, or that will fit on your roof. The more energy you generate, the faster you can pay for your system and start saving the most money.